Emerging technologies move toward the core

Emerging technologies, though still nascent, are becoming a growing part of IT channel partner portfolios, as well as the top driver for change within the technology ecosystem, according to the most recent annual State of the Channel report from CompTIA.

“The ability to build a business around artificial intelligence, virtual reality, blockchain, drones, IoT, etc., will take companies into a future growth path, for sure,” reports the IT channel association.

By 2021, research firm IDC predicts that emerging technologies such as robotics, drones, augmented and virtual reality and 3D printers will account for almost a quarter of total information technology spending. Of course, we are not there yet, as most channel partners continue to drive the bulk of their revenue from a more established set of sources, show CompTIA’s findings. At present, managed IT services, such as remote network monitoring, are the top offering named by channel partners – a part of the portfolio of 51 percent of responding channel partners and a top revenue producer for 33 percent of channel firms.

“And while admittedly it’s been a long, slow march to transform from a mostly product-based transactional business to a services-based recurring revenue operation, a majority of today’s channel firms now at least offer some managed services to go along with other products and solutions,” said the CompTIA study.

CompTIA is quick to point out, however, that most channel firms, especially those coming from the more traditional ranks, remain hybrid in nature. “They might identify as an MSP, but also conduct some hardware sales, integration services, cloud and SaaS work, and other activities,” the report continued.

CompTIA is quick to point out, however, that most channel firms, especially those coming from the more traditional ranks, remain hybrid in nature. “They might identify as an MSP, but also conduct some hardware sales, integration services, cloud and SaaS work, and other activities,” the report continued.

Meanwhile, consulting work is increasingly popular, especially among the smaller-sized segment of the channel. Roughly half (49 percent) of all respondents report to doing consulting work – both technical and business in nature – to be one of their main revenue streams during the last two years. Among companies with between 1 to 49 employees, 55 percent cite consulting as one of the services they offer. 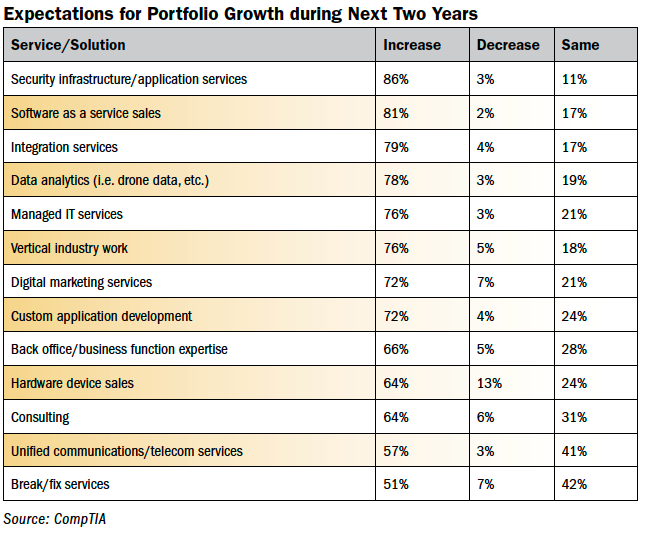 Not surprisingly, the surge in consulting can be attributed in large part to the cloud. Many customers are now able to self-provision solutions directly but are overwhelmed by their choices.

“Of the thousands of SaaS applications in the cloud today, it’s hard to know which will best meet a desired business outcome,” said CompTIA. “In comes the consultant, who is versed in a wide variety of cloud applications and is able to vet a selection to suit individual customer needs.”

Consultants also can assist with long-term business strategies and help address how cloud solutions integrate and interact with a customer’s full IT and business environment, said the IT association.

Likewise, hardware sales have been on a “downward spiral” and are now among the bottom of the list of services provided by IT channel partners as firms move further into services and recurring revenue. The same can be said for break/fix services, which now generate the most revenue for just 18 percent of respondents – about the same amount that cited digital marketing services as a top revenue generator.

In terms of emerging technology, half of respondents report to being in the production stage, suggesting that at least one or more emergent technologies are an active part of their portfolios and are currently being sold to customers. About three in 10 are in the experimental stage, with both these figures creeping higher the larger the channel firm is in size.

Again, it’s important to note that “emerging technologies” can include a large number of disparate or complementary services, and adoption among customers is still nascent. 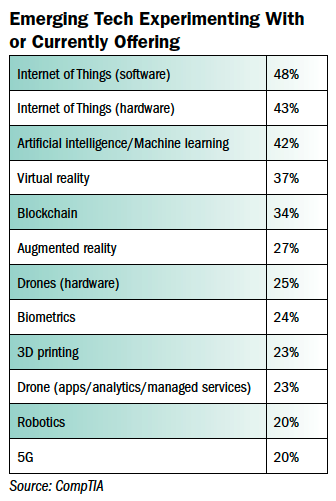 “It is quite likely that the 51 percent of respondents that said they are in production mode with emerging techs could be talking about a single customer engagement or experience,” warned the report.

Nonetheless, IoT – both hardware and software – tops the lists in terms of familiarity among IT channel firms, “IoT solutions, which encompass myriad elements from hardware sensors and other devices to data capture/ analytics software, have been on the market longer than most of the other emerging techs,” reported CompTIA. “And many channel firms have at least begun working with IoT in some fashion, chiefly selling and installing devices along with providing some managed services around those devices.”

The top barriers to entering into emerging technology sales, meanwhile, include the need for technical and sales training, the cost of entry and the difficulty of hiring staff with the appropriate skill sets. Despite these very real and significant hurdles, however, half of all respondents expect most of their revenue in the next two years to come from net-new business.

“It stands to reason that much of that new business could be predicated on emerging tech solutions,” surmised CompTIA.

This article originally appeared in the January/February 2019 issue of ChannelVision.